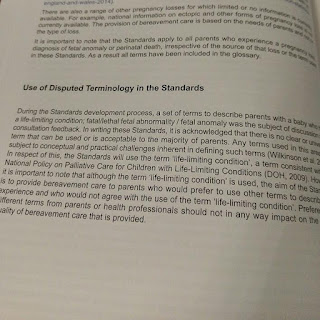 This photo, taken by an AIMSI committee member, is from the Bereavement Standards Following Pregnancy Loss and Perinatal Death which was launched on August 10, 2016 and attended by AIMSI.

Contrary to belief within some circles, the term 'fatal fetal abnormality/anomaly' IS IN THE DOCUMENT, where it is explained (see photo) that there is no legal, medical, ethical or 'right' way to refer to these tragic cases. The point was also made by each of the speakers (Dr Ciaran Browne, Mr Tony O'Brien & Minister Simon Harris) that there is no symbolism in the language used and the terms are interchangeable and self determined. Indeed, each of the speakers used various terminology throughout the launch.

This morning AIMS Ireland posted this photo with the caption: 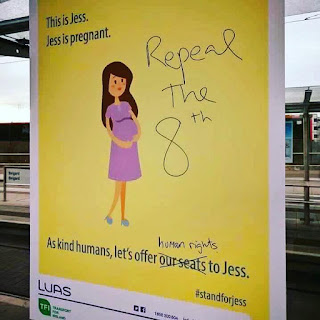 A bit more on Jess...The 8th Amendment affects pregnant people who want to be pregnant as well as those who do not. Jess's right to informed consent and informed refusal is removed due to the 8th Amendment. The National Consent Policy of Ireland directly cites the 8th Amendment as a barrier to informed consent/refusal in pregnancy, labour, and childbirth. Jess should be supported to enjoy the same freedom to consent which is outlined (and protected) to all other non-pregnant people in Ireland. Jess's ability to informed decision making - to make the best decision for her & her baby in their specific circumstances in pregnancy & childbirth has been removed from her. AIMSI speak to pregnant people daily whom have had their rights removed. Human rights in childbirth is real. ‪#‎humanrightsforjess‬ ‪#‎repealthe8th

More on Human Rights violations in Ireland as a ramification of the 8th Amendment: 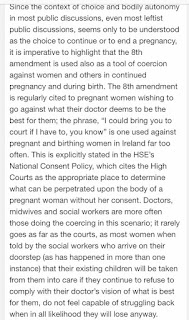